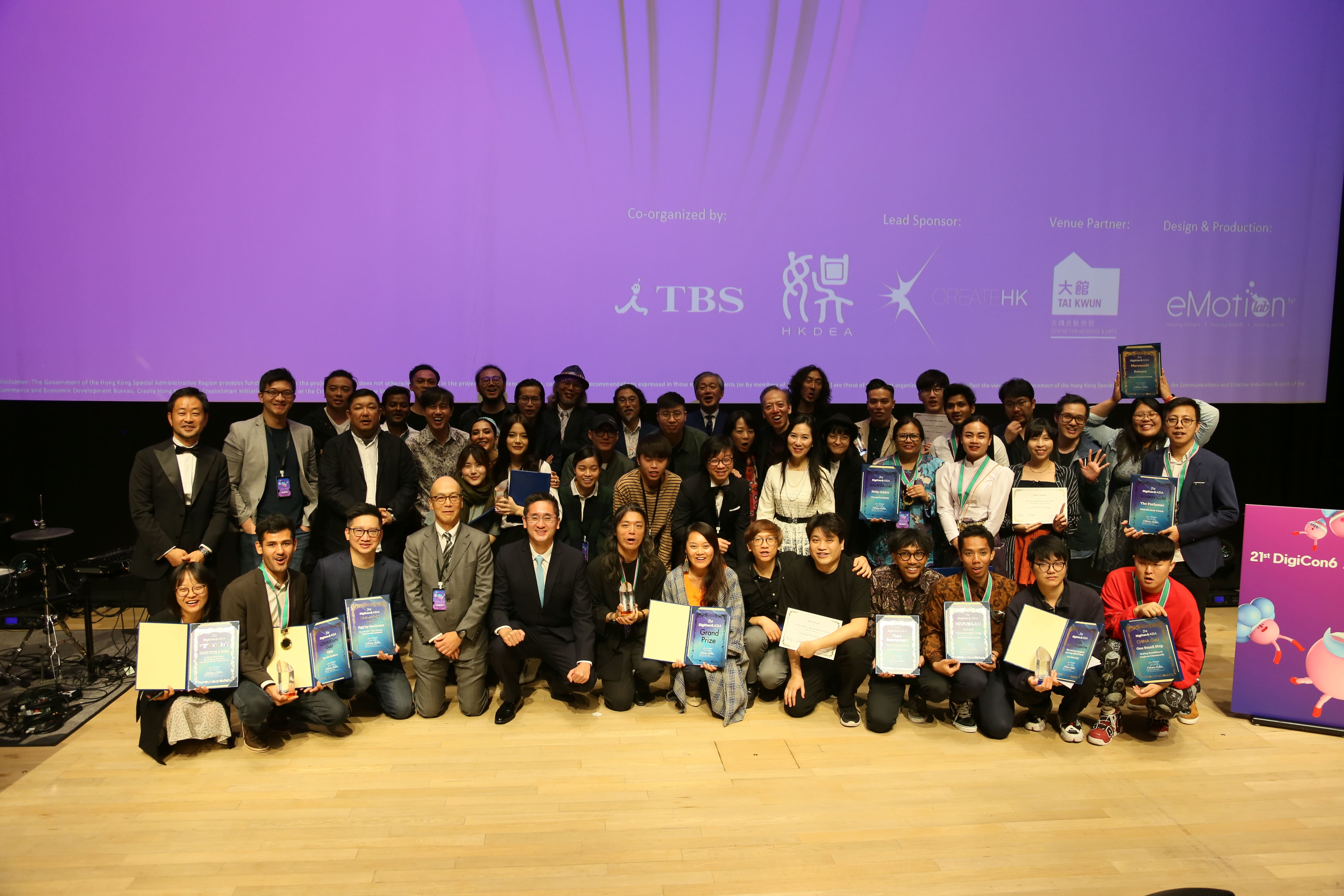 The co-organizers were honoured to have Dr. CHAN Pak Li, Bernard, JP, UnderSecretary for Commerce and Economic Development of The Government of the HongKong Special Administrative Region to be the Guest of Honour of the AwardsPresentation Ceremony to present the DigiCon6 ASIA Gold Award – Grand Prize. Ms.YUEN Choi Fong, Jersey, Assistant Head of CreateHK, Mr. Gabriel PANG, Chairman of HKDEA, and Mr. MikioKOKUBU, Managing Director ofTBS, among others, also presented awardsat the ceremony.

As Asia's foremost animation short film competition, the “DigiCon6 ASIAAwards” has more than 20 years of history. It aims to discover and supporttalented art creators in the region, and help them to promote their digitalworks internationally. This year's competition attracted more than 2,000applications from Asia, which signified its popularity and importance withinthe industry.

Dr. CHAN Pak Li, Bernard, JP, Under Secretary for Commerceand Economic Development of The Government of the Hong Kong SpecialAdministrative Region expressed his gratitudetowards HKDEA and TBS Holding Inc for co-organising the "21st DigiCon6 ASIA Awards”Presentation Ceremony and the related activities in Hong Kong as wellas towards Tai Kwun for being the venue partner. Dr Chan also warmlywelcomed the first-time participant Uzbekistan andrepresentatives of Iran as observant to participate in variousactivities. He further congratulated all winners from HongKong and other regions.

Mr. Gabriel PANG, Chairman of HKDEA commented, "HKDEA iscommitted to the promotion and development of Hong Kong's digital entertainmentindustry. The DigiCon6 ASIA is one of the most important short film festivalsin Asia, and it is an honour for Hong Kong to be able to host the 21stDigiCon6 ASIA Awards Presentation Ceremony. This proves that Hong Kong isrecognised as a leading animation powerhouse in Asia. Today, outstandingcreators from 14 Asian countries and regions are gathered here, giving Hong Kong digitalcontent producers an excellent chance to interact with and learn from the creamof the crop. Hong Kong representatives attained excellent results in previouseditions, and John Chan, a former Hong Kong representative andGold Award winner of the Grand Final, was invited to design the visual theme ofthis edition’s DigiCon6 ASIA Awards, which helps showcase Hong Kong's digitalcreativity to the international audience. It is very heartening to see HongKong representatives clinching the awards again this year."

Mr. Takafumi Yuki, Digicon6 ASIA Headquarters InternationalAlliance Officer added,"Moving the awards presentation ceremony, screening of the winners' films,Asian Master Summit, and other events of the DigiCon6 ASIA Awards to Hong Kong has been a decade-long dream of TBS Holdingsand HKDEA. We are happy that the events are finally held in Hong Kong and have received the strong support of the Government of the Hong KongSpecial Administrative Region and different parties from the trade. Together,we will bring DigiCon6 ASIA Awards - proudly made in Asia - to Asia and theworld."